Hello, my lovely blog. I haven't written here in ages...

The mission of this new adventure? To help political activists heal, emotionally and spiritually.

Why? Because I'm realising there is a lot of pain in our feminist & lefty communities. And that is bad for us and our movement.

If we want to build a strong political movement, and if we want political activists to be happy, we need to come up with a way to “do politics” that does not requires us to sacrifice our wellbeing.

If we want to be world changers, we have to find a way to heal our pain; then we can go back to the political world with a new perspective.

The name of this new adventure is “Widdershins”... it's the mystical word for “anti-clockwise”. And in order to get there, you have to “turn widderhins”, ie: turnwiddershins.co.uk

The Widdershins approach to politics is almost the opposite of what you would expect. But I find it's the only one that allows me to think about politics without going mental.

Join me and my imaginary monster as we try to redefine what it means to be a political activist.


I'll discuss politics as well, sure. But hopefully I'll be doing it from a place of compassion, which may turn out to be more effective than getting mad at each other over who's the “rightest”.

See you on the other side.

The Answer is No

Readers of this blog will know that I tend not to engage with the “issues of the day” unless my hide gets seriously chipped.
Well… there’s a chip in my hide.
Sometime this week, Conservative MP Louise Mensch wrote a poorly articulated piece on how you can totes be a Tory and a feminist.
Cue in the media frenzy that has everyone clicking and ignoring the issues that matter.
I ignored this media frenzy because, honestly, I have a life to live and a huge pile of irons to sock.
But today I read the last straw.
So I’m going to engage with this argument that “you can totes be a feminist and a conservative because omg Emmeline Pankhurst joined the Conservative party”.
British people do this all the time. They suffer from “me-centre-of-Universe” syndrome.
Teenagers believe they are the first generation to discover sex. And white middle class people from Rich Industrialised Countries believe they are the first to invent Feminism. Or Pacifism. Or Atheism. Or a whole host of other things.
I’m sorry to burst anyone’s bubble, but none of this is true.
And just because Mensch says that “feminism starts with Emmeline Pankhurst” it doesn’t make it so.
I am shocked, but not surprised, that all feminists up and down the country are willing to accept this: a Conservative woman suddenly gets to decide WHEN feminism started, and (Quelle Surprise!) it turns out that feminism started with a Conservative woman.
I’m sorry, but WHAT???
Fast forward a good decade; Mary’s knowledge of Emmeline Pankhurst extends to one mention in Mary Poppins.
But Mary attends high school, and eventually the curriculum stumbles onto a small oasis of feminism: Sor Juana Inés de la Cruz born in 1651. Mexican scholar and poet, and one of the first great writers of Latin America.
Her positions on women’s rights were so radical they would make most contemporary feminists blush scarlet.
Then again, why travel so far? Mary Wollstonecraft, who needs no introduction, was born in 1759. She is regarded as one of the founding feminist philosophers.
So precisely why are we heralding Emmeline Pankhurst as the “founding mother of feminism”, born a good century after Wollstonecraft? Because Mensch says so? Because she was a conservative?
Why not choose EmmaGoldman? Is it because she was an anarchist?
Or Rosa Luxemburg, for that matter? Is it because she was a Marxist?
Feminism has been around as long as patriarchy, because every time a man has said “you can’t because you are a woman”, there has been a woman who replied “unfair!”.
Yet Feminism is probably the only political ideology to lose itself in the name of “inclusivity”. And the inclusivity agenda has gone absolutely bonkers: a conservative calls herself a feminist, and that makes her so.
H*gh H*ffner calls himself a feminist and that makes him so.
And those of us who want “Feminism” to mean SOMETHING are seen as arrogant. We have no right to exclude anyone from the Feminist label…
Well, I’m sorry, but no. And to argue otherwise is to put the ideas of Louise Mensch and H*gh H*ffner above this feminist; and countless others.
No, you can’t be a Tory and a feminist. Because to be a feminist means fighting to end the oppression of women as women. All women.
Feminism does not mean “I am a wealthy woman and I want to end the oppression of wealthy women as women”.
But the real reason why Tories can’t be feminists is this: because Conservative ideology is so extremely patriarchal it would be 100% impossible to even end the oppression of wealthy women as women.
To be a Feminist Tory is to fight a lost battle. Which is why I’m suspicious of any Tory who calls themselves a feminist: because most of the time what their goals amount to is “I want to end the oppression of myself”.
And that’s not even a political movement, much less “Feminism”.
One last thing. Remember that when those in power want to appropriate your ideas and your language, that’s a sure sign that you are winning.
For a most excellent, well reasoned and original take on why these Tory powered “austerity measures” (ie: cuts) constitute an attack on women, you can read my post forThe F Word.
Posted by Mary Tracy at 13:41 1 comment:

Email ThisBlogThis!Share to TwitterShare to FacebookShare to Pinterest
Labels: feminism, politics, the Right

Guess who is a top doodler as well as a top writer? 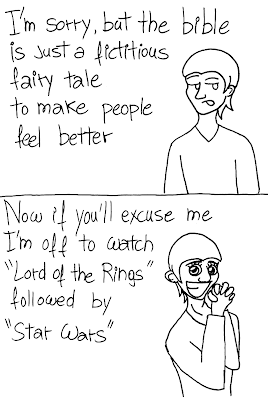 The other day I passed the church in the middle of the city. I stopped to look at the "nativity" scene and paused to reflect that this was the only representation of the real meaning of Christmas that I had seen, not just in the city but in the whole of the Holiday period.

There it was, this church, surviving right in the middle of a crass consumerist bonanza, this collection of shopping centres that have grown so big as to take over the city centre entirely.

I thought of atheists, who usually have plenty to say during Christmas time... and I said to them: "People are worshipping an entirely different God".
Posted by Mary Tracy at 09:51 5 comments: 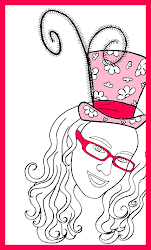